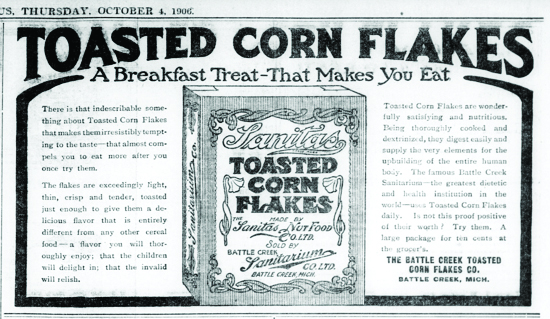 Kellogg came from a Seventh Day Adventist background, and this version of Christianity influenced Kellogg’s fascist dietary and sexual abstinence values —which were reinforced in visions and prophesies. For example, Kellogg advised people to chew each bite of food 40 times before swallowing. The dude couldn’t stop masticating.

Kellogg was an actual medical doctor. He graduated med school in 1875 and in 1876 became director of a hospital which he renamed the Battle Creek Medical Surgical Sanitarium in 1877. Apparently Kellogg coined the term “sanitarium” to suggest both hospital care and the importance of sanitation and personal health.

Kellogg inflicted the following horrors on his patients:

• Electric light baths — a wooden cabinet lined with light bulbs, in which the patient could either sit or lie down.
• Mild doses of electrical current directly to his patients’ skin.
• The “continuous bath’ – like a regular tub bath, except it could last, for many hours, days, weeks, or months.
• 14 litre enemas administered by special machines capable of pumping 15 quarts of water per minute into a patient’s bowels.
• A vibrating chair that shook 60 times a second to loosen patients’ bowels.
• Kellogg also advocated yogurt enemas.

Kellogg was a dietary puritan, and he hated feeding the chooks. Here’s the connection between the two.

From 1877 to 1894, Kellogg and his family began experimenting to produce a soft breakfast food, easy to chew, for his patients.

In 1890, John formed the Sanitas Food Company (later Sanitarium) to develop and market food products including his patented cereals which had built up a following among ex-patients.

Kellogg published a book, Plain Facts for Old and Young, which you can easily read. The book is barbaric from start to finish, choc-full of quackery, misogyny and scientific racism.

Kellogg encouraged strict abstinence from all forms of sexual activity or contact, even among married, heterosexual couples. Kellogg is reported to have refused to bang his own wife for forty years.

How to function with erectile dysfunction

“The transgressor seems to know, instinctively, that he is committing a great wrong, for he carefully hides his practice from observation,” Kellogg wrote. “In solitude he pollutes himself, and with his own hand blights all his prospects for both this world and the next. Even after being solemnly warned, he will often continue this worse than beastly practice, deliberately forfeiting his right to health and happiness for a moment’s mad sensuality.”

The sick fucker also wrote in his book “For girls, applying carbolic acid to the clitoris is an excellent means of allaying the abnormal excitement and preventing the recurrence of the practice in those whose will-power has become so weakened that the patient is unable to exercise self-control.”

But cornflakes were never advertised as anti-masturbatory

Plain and bland foods and drinks, on the contrary, he described as “wholesome and unstimulating” and said “Graham flour, oatmeal and ripe fruit are the indispensables of a diet for those who are suffering from sexual excesses.”

Thanks Snopes.com and History.com for helping us bust this myth – Dogbox Ed.