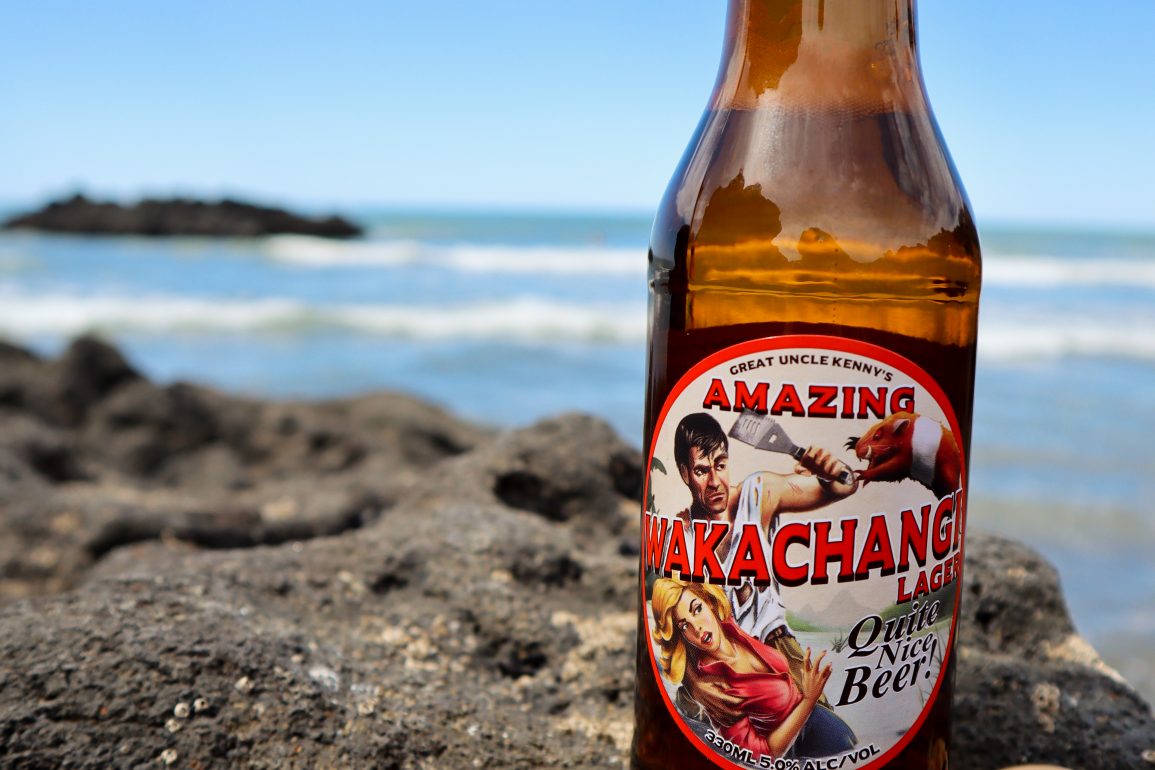 We talk with Leigh Hart about what’s next for NZ’s oldest and most trusted beer, Wakachangi.

Most Kiwis know comedian Leigh Hart – or That Guy – best from Moon TV, Late Night Big Breakfast, Screaming Reels and Speedo Cops. Since his first appearance as an international snail trainer on SportsCafe in the mid ‘90s, his illustrious television career has gained a kind of cult following. And while that kind of notoriety would be a lot for any bloke to deal with, Leigh has his ways of staying grounded. Chiefly, working hard to honour the legacy of his Great Uncle Kenny (one of New Zealand’s most prolific inventors, adventurers and philanderers), by bringing his impeccable craft beer, Wakachangi, to the unwashed masses.

According to legend, the first batch of Wakachangi was brewed around 1648 by nymphomaniac monks in Portugal. Their goal was to make a beer that could be used to treat colour blindness and the effects of asparagus wees – but once the Catholic Church got word of it, they wanted the beer for themselves. Through a series of events many people feel inspired Dan Brown’s Da Vinci Code, the monks went into hiding with the recipe. It was lost for nearly 400 years until, inexplicably, it was rediscovered just outside Greymouth by Leigh’s Great Uncle Kenny, who spent many years perfecting the recipe.

We spoke with Leigh about the beer, the launch of its perfect accompaniment – Snackachangi chips – and what fans can expect from Great Uncle Kenny’s (seemingly limitless) bag of tricks next.

ITDB: If you met an Amish kid running amok for a weekend on Rumspringa, and they had never tried Wakachangi, how would you describe it?
Leigh: Wakachangi is New Zealand’s beer! In other words, it’s a South Otago beer with North Canterbury
flavours, brewed near Nelson by a West Coaster using the ol’ misty waters of the Waikato. (That should
keep most people happy.)

ITDB: Where did the name Wakachangi come from?
Leigh: My Great Uncle Kenny discovered the ancient recipe many years ago and that was one of the words that was on the ancient manuscript, along with many other typos.

ITDB: How many years has Wakachangi taken out the title as the winner of the Moon Breweries beer awards?
Leigh: It’s a little embarrassing to say, but we’ve taken the award out every year since the awards began. It would be nice to mix it up and see someone else win it, but you can only really go by how the judges see it. It’s
worth noting that Wakachangi was also voted ‘Best Newcomer’ at the international beer awards in 1648.

ITDB: Why get rid of the original 2-litre bottles? Would you ever consider bringing them back?
Leigh: It wasn’t really practical at the time, but we’re considering introducing the Wakachangi 50 litre fish tank format. This will be great for offices.

ITDB: What inspired Wakachangi’s ‘hardly a true word on the label’ style of brand story?
Leigh: I am a little confused as to what information is not factual on the label? It has all been fact checked by our in-house fact checkers, and they are also vetted by our in-house HR department, who also need to be vetted by an independent in-house HR department. The beer has been going since 1648 so it has a long history. It’s hard to get every detail exactly correct, but we try – and that’s why we have been voted ’NZ’s oldest and most trusted beer’!

ITDB: We heard Wakachangi may be developing other beverages, like Whisky – are these still in the potential pipeline?
Leigh: We’re looking at a few new beverages. Also, a seafood chowder flavoured mouthwash and a red wine that comes in a powder sachet format.

ITDB: Where did the idea for Snackachangi come from?
Leigh: Snackachangi Chips came a result of an ancient potato chip recipe my Great Uncle Kenny found while excavating around Machu Picchu.

ITDB: How many packets of chips are being sold at the moment? We saw in the news there was a nationwide
shortage over Christmas.
Leigh: It’s hard to say how many chips are being sold at the moment, but it’s somewhere between a few thousand and 35 million a month. There have been shortages, but we’ve installed a new Crinklehopper 3000 chip machine which should rectify the problem.

Quick Winter Eats
That Taste as Good as they Look

ITDB: What other flavours can Snackachangi fans expect to see coming soon?
Leigh: We’ve got two new flavours come out very shortly. I can’t give too much away other than to say, they’re
fan favourites with a twist. It’s time to renew that gym membership!

ITDB: What else is on the horizon for the ‘Changi’ family of brands?
Leigh: It’s hard to say what’s next… often its best to sit back and see what rears its head as opposed to trying too hard to come up with something new, but I have heard rumours of a budget airline where passengers can save money by skydiving once over their destination. Chips and beer will, of course, be the inflight refreshments.

ITDB: Why do you think fans have taken such a liking to Uncle Kenny’s beer and chips?
Leigh: Probably because of the honesty and the quality. We don’t pretend to be something we’re not.

ITDB: What are YOU most proud of with regards to Waka-and-Snackachangi?
Leigh: Probably the team that has helped pull it together – from everyone at the brewery to the small team in concept and marketing. And, of course, the consumers for reading between the lies and buying into the attitude of the brand, which is essentially ‘Good Fun’.