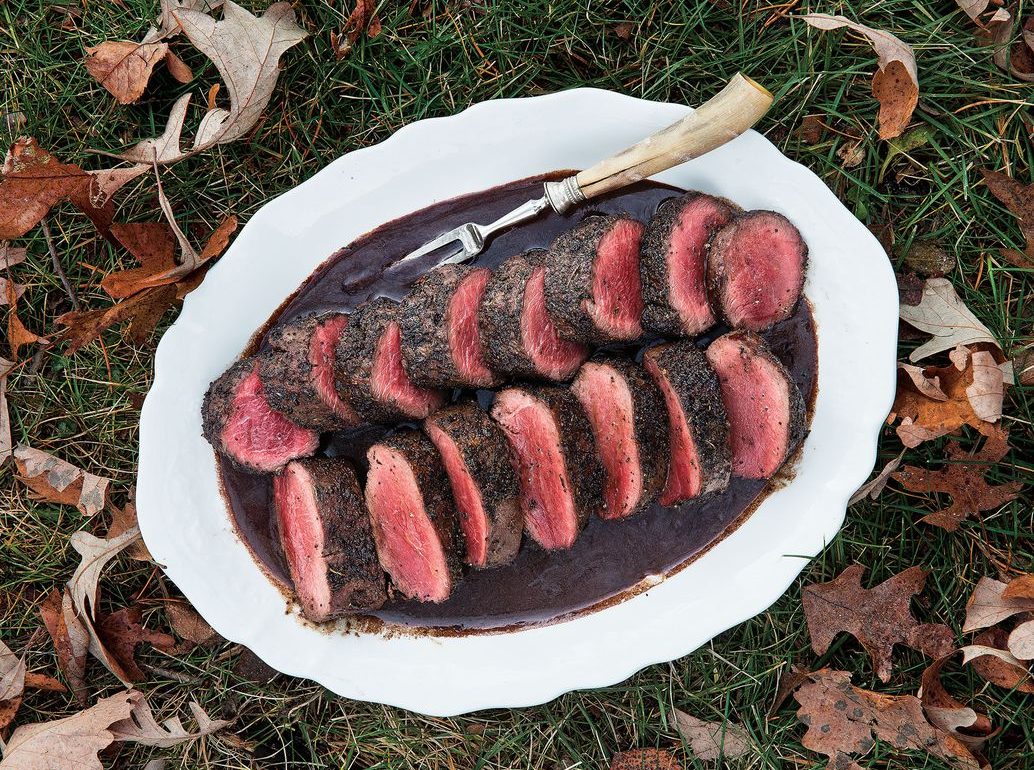 The Art of Venison

Some say low and slow, others swear by fiery and fast. Here are our tips for cooking your trophy stag.

One of the great travesties of this world is improperly cooked venison. In fact, the only thing worse than venison that’s poorly prepared and cooked, is venison that goes to waste sitting for months in a freezer because
a hunter is too scared to ruin it! A lot of people are scared to cook wildcaught deer meat themselves, but with a little know-how, a sharp knife and some salt, it’s simple to create a culinary masterpiece that will knock your hunting buddies’ Swannies right off their backs.

BRO, BE COOL
Many hunters swear by cooling your meat as soon as possible after the kill to slow deterioration and bacterial growth – improving food safety and the quality of your venison meat. The most effective way to do this is to remove the viscera from the body cavity and rinse it out as soon as possible. Propping open the body cavity, keeping the carcass in the shade and exposing it to air movement by suspending it from an overhead object also improves cooling. Be careful to not allow the carcass to freeze within the first six hours after harvest since this can result in the meat becoming tough.

KNOW YOUR CUTS
Learn the various cuts of meat, and what they’re best suited for. Muscles such as shanks and neck meat have a lot of connective tissue. This makes them impossible to grill, but means they’re great for stews because those
tissues break down during slow cooking and add richness to your dish. Backstraps have little or no fat in them, and can get stringy in a stew. They’re much better suited to the grill! Understanding the tissue composition of each cut, and which cooking method is best suited, will ensure you get the best bang for your buck (get it?).

AVOID OVERCOOKING
Wild game is typically much leaner and less forgiving than domestic meats – and usually cooks faster. That means, even if you’re following a recipe to a T, you may end up with meat that’s overcooked and dry. Another factor to consider is that, because venison is so high in iron and so low in fat, it doesn’t have the same resistance to overcooking such as fattier meats like marbled beef.

Never cook venison past medium if using a dry cooking style like pan-grilling or grill barbecuing. If using a moist cooking method like slow cooking or casseroling, venison should be cooked at low temperatures to avoid drying the meat out. As meat heats up the muscle fibres contract: squeezing out the moisture. Because venison has so little fat, it becomes dry if it’s cooked at a high heat for too long.

If you don’t already own one, it’s well worth investing in a meat thermometer – which will help you cook tender, juicy venison each and every time.

BRINE, BABY, BRINE
Brining can fix a lot of common complaints with game meat, and venison is no exception. Venison is a lean meat, which makes it more challenging to retain its natural juices during the cooking process. Not only does the salty water break down proteins in meat to tenderise it – it also soaks into the meat fibres that have a lower salt concentration, which hydrates the meat. In short, brining your venison amps up the flavour and renders a juicy result. It can also help draw out some of the blood and make that gamey flavour a little more subtle.

Before you brine, prepare the meat by trimming off as much fat and connective tissue as possible, then score any silverskin – being careful not to cut into the meat. Mix your brine according to your taste preference, and then soak your meat for 12 – 24 hours, depending on the cut and portion size.

RAISE TO ROOM TEMP
Just as you should with any meat, allow your venison to come to room temperature before cooking. Cover with a paper towel and let it sit for at least 10-minutes. For thicker cuts of 3cm or more, you should aim to let your venison to sit for 30 to 60 minutes before it goes anywhere near a pan, grill or oven. This is the best way to ensure your meat cooks evenly – and protect against charred surfaces and cold centres – for succulent results.

1. Slow Cooking. Set your slow cooker to a low heat to break down the connective tissues. Cook for 6 – 8 hours. Perfect for necks, shanks, shoulders and trim meats.

2. Roasting. When roasting larger cuts, sear all sides of the meat first to seal in the juices. Ideal for the saddle (loin) and haunches (back legs).

3. Stir Frying. Venison stir-fry only takes a couple of minutes cooking on a high heat — just remember to keep the meat moving in the pan or wok to avoid over-cooking.

4. Grill Barbecuing. Ideal for backstraps and tenderloins. Cut your steaks to around 4 – 5cm thick This will give you some breathing room, so you’ll be less likely to overcook the meat.

5. Pan Frying. Remember to oil the meat, not the pan. Brush each side of the meat with a little oil, before searing for one minute each side per cm thickness. Perfect for steaks.

GIVE IT A REST
Meat continues to cook for some time after it’s taken out of the oven or off the grill, and needs time to relax again after being subjected to heat. Resting the meat allows the muscle fibres to relax – ensuring that, when the meat is carved, the juices will remain in the meat and not be squeezed out. If you want venison that’s tender and juicy, cover with a clean dry cloth, and pop it in a warm place to rest for around half the time you cooked it for.