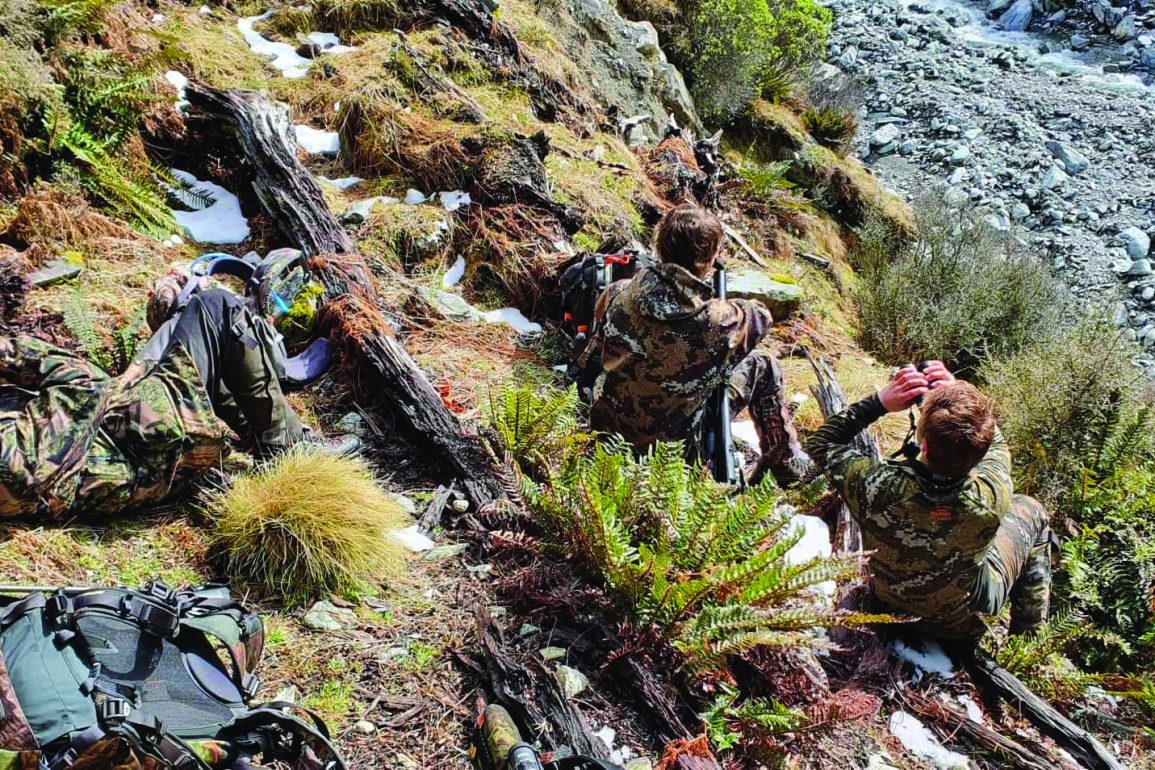 TAHR HUNTING IN THE ALPS

Finally, the frustrating wait was over, and the trip to paradise had arrived. Beginning in Hawkes Bay, the Southern Alps is no less than a mission away.

With a midnight start, an ideal location on the map, a great group of guys and a newly built rifle, I knew I was in for a good time. The rifle was a bit of a project, an old gem Sako AV in 280 ackley tidied up with a big boy Sig Sauer scope as the cherry on top. The trip down was an eventful one, with my head gasket giving up before even hopping on the ferry and leaving the North Island. That posed a challenge, collecting enough water in towns to fill a pool, in order to top up the radiator every 30-minutes of the trip. With a mission on our hands, that wasn’t going to stop us. The near on 15 hours of driving quickly became rewarding as the alps gradually grew in front of us. With great weather, heading up the guts of a surrounding valley of mount cook is something I’ll never forget, amazing scenery everywhere you look while drowning in the freshest of snowy air.

The next morning, the weather was heading in, but the Tahr won’t shoot themselves so we paired up and headed for the sky. Heading up with my brother, an experienced hunter in the alps, gave me a lot of hope in reeling in something good. For me, hunting a new species came with extensive glassing and buck fever on the climb up. Reaching snow roughly half way up introduced us to the idea of whipping up some backcountry cuisine with the f inest of water, melted down snow. Strong lesson learnt to not scoop too deep as you’re left with an extra crunchy rocky meal. Nearing the top of what we were equipped to climb to, we were met with some unwelcoming weather. Eventually standing on a narrow rocky ridge with wind so strong that the snow travells uphill on either side, definitely an exciting predicament to be stuck in. Heading up with a mountain monkey introduces a new set of challenges. Although, the weather brought its benefits, an excuse to spy on some nannies a ridge over, vastly reducing the dreaded buck fever. It’s amazing how well they can straddle the sides of massive rocky bluffs.

As the weather began to clear, the day was getting on so we began to head down. We took a different route down, with more bush to creep through. This gave us the opportunity to peek our way out into the large mountainside clearings that the alps have to offer, keeping ourselves very concealed as we make our way into the evening hours.

After a big day climbing it’s hard to maintain the strong hunting mindset but going after such a unique animal I knew that calling it a day was the worst idea. Still to this day I can’t figure it out but some variant of a gut feeling caused my brother to slow right down. Almost as if he knew for sure that something was there. He worked his way towards an opening, peeking out of the bush edge, and low and behold, he spotted a bull feeding roughly 150 yards above us. Me, less than a metre behind him, had no visual on it.

With nothing but actions, I was demanded to take it, certainly nothing to complain about. Crawling out of the bush while he retreated back in, I very gently flattened out the tussock and took my rest. As I looked through the glass, all the pressure built up. The bull stood side on and at such a close distance, the shot was practically guaranteed, but I didn’t take that for granted. I gently pulled with the tip of my finger and bam! He sprung up onto his rear legs before plummeting to the ground. A massive feeling of achievement ran through my veins. I did it, I scored my first bull tahr! In complete disbelief, it tumbled down the hill stopping a few metres from where I stood, any further and it would have gone down a bluff. Measuring in at 10”, it’s no trophy head but it’s definitely something I was proud to take away from the trip. As my brother spotted it, I’ll never be able to claim it purely as mine and I still haven’t heard the end of it to this day.

With an unexpectedly blunt knife, rain setting back in, and holding a dead weight on the hill, it was a very slow and awkward skinning process. The limp and constant slipping down the mountain and back to the hut was nothing exciting with a heavy soaked skin around my neck, rifle in one hand and the head in the other along with wet pants that wouldn’t stay up. Getting back to the hut and ripping open a cold beer all felt like a dream.

The Roar of the Red Stag

The next morning we woke up to much worse weather, everything already drenched after a single day of hunting, although a successful one at that. It came as a good opportunity to take some time to strip back the skin from the meat left behind, before salting it and storing it as dry as possible in hope it’d last the remainder of the week.

Nothing dried that week and everything found a way to get soaked. It was certainly an experience putting on half frozen jackets and boots each morning. We had some great days along with some very stormy nights with some aggressive thunder, all adding to the awesome experience. The last day finished great with two more Bulls down, my brother knocking down a beast measuring in at over 12”.

Spending a week in the alps is definitely a cool experience and every cent I spent was well worth it. Next time I aim to push myself and head higher with the idea of going after the big boys. Arriving home, my tahr skin was still in great nick with no sign or smell of going rotten. Thought I’d give tanning a crack, using the Leder tanning kit, and for my first time I was real happy with the result. There’s a bit of a process behind it to get it right but I think it’s an awesome thing to learn and makes the skin much more personal compared to sending it away. With a bit of experience, the Southern Alps are definitely a place you need on your trip list!