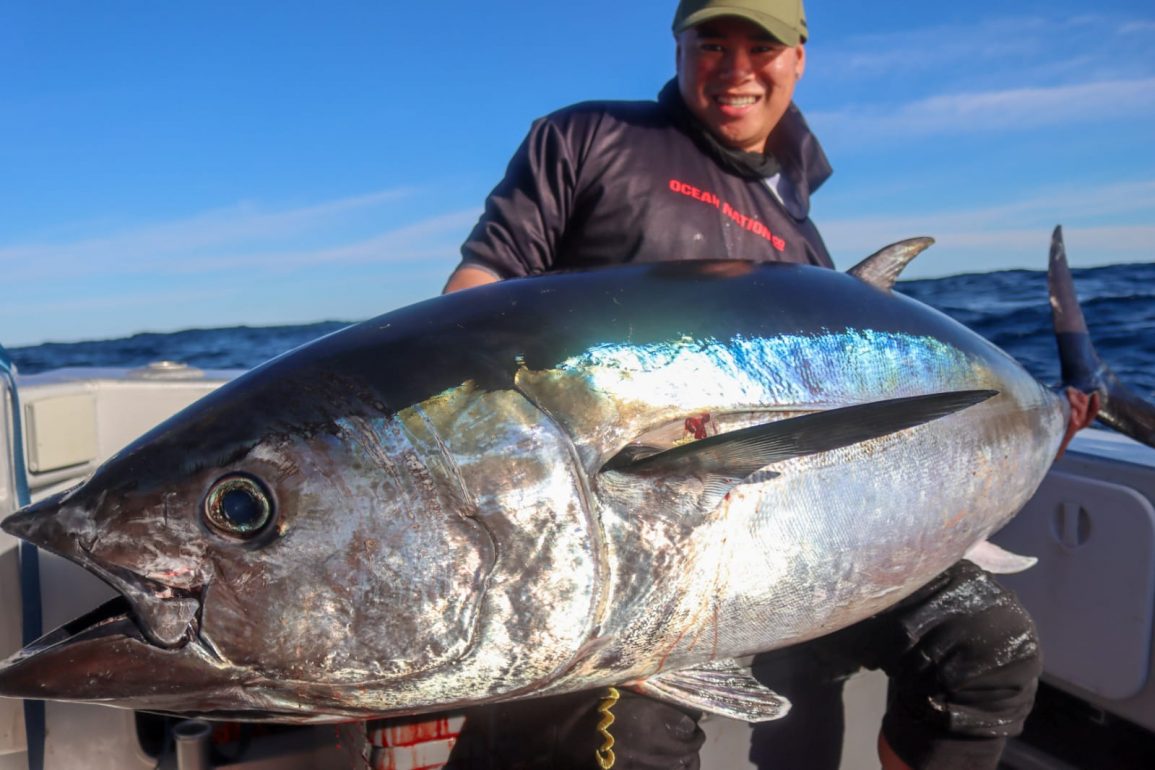 With a weather window too good to pass up, me and a couple of mates (Injun Park and Sam Bray) put a quick plan together to head down to Waihau Bay. We rigged up our lures, packed our bags, food and drinks and were off the next morning – meeting at Injun’s house to load the boat, and prepping ourselves for the 6 – 7-hour drive. You can imagine they hype and excitement going through us!

If you’re planning a trip to Waihau, 42km north of Gisborne, give yourself plenty time to get there and share the driving because routes in and out are slow. As we got closer, we stopped at the last gassy and filled the boat with fuel and as much ice as we could possibly carry, knowing all of it would come handy.

Arriving at our destination that night we launched the boat and parked up for the night in the bay, knowing the ramps would be hectic in the early hours of the morning. With some recent good intel from other anglers who’d been out that day with multiple hook ups and few fish being landed, we knew we had a good chance. That meant an early night in the boat for the three of us, and an early morning rise the next day.

Our alarms went off at 4:30am next morning. It’s not often we wake up to our alarms that early – unless it’s fishing-related – so we prepped ourself and steamed out for nearly two hours to the 1400m. Our lures were deployed, with our choice of colours including lumo, orange, black and purples. For tuna lure use any from 6″ – 10″ in size, rigged double hook 8/0 ‐ 9/0 300lb leader. Our favourite shaped lure heads range from bullets and slanted to cupped spouters.
As the sun slowly creeped up from the horizon, we heard the first fish over the VHF and readied ourselves for bite time. Sure enough, BOOM! The reel starts screaming off. Southern bluefin tuna are often found in small schools, so, upon hooking up, carry for another minute – keeping your lures in the water before you start clearing the gear, as this is likely to result in a multiple hook up.

Sam was on the rod first as this has been his ‘bucket list’ fish, with so much adrenaline pumping we were hyped. With Sam winding the couple of hundred meters of line that the tuna had steamed off with he says, “this is piss easy”. Until, of course, it got to the boat. The load of the fish really came on, as it was straight under us now, and there were a few hairy moments as tuna circled the boat. You often hear people losing fish boat-side, due to either too much pressure or leader wraps causing change in tension. This can result in fish going for another run, which can also cause the fish pulling hooks. Luckily, we were a good team and communicated well – landing our fish to cries of “chahoo” and high fives all-round.

After a quick photo, immediately bleed your fish behind the pectoral fin, gills and tail. The blood is warm and will cook the meat if not chilled straight away. We had a good insulated bag and chilled the fish ASAP, then – with our adrenaline still pumping high – we set the lures again with a celebration beer in hand. It was only 8am by this time (it’s beer o’clock somewhere in the world, right?) so we carried on our tracks. An hour went by and we saw mass pods of dolphins, so we decided to follow them as we’d heard that tuna swim with dolphins. We were glad we did, as the pursuit resulted in a four-way hook up. It was all mayhem on board, and me and Injun got our harness on. I was fighting two fish – one in the rod holder – and Sam was fighting his second fish in the rod holder, with Injun buckled in to his rod. The fish I was fighting in the rod holder came off early in fight, which made the three-fish-versus-three-anglers a lot easier. A few times we were doing the tuna tango with rods and lines going under and over, though we manged not to get tangled. Sam got his fish to the boat first, which we tagged and released (estimated 60kg), then Injun was next to get his fish in (estimated 70kg) and into the bag.

It was down to me now, and my fish was stubborn and putting on a good fight. After 30 minutes or so we got it in and it was a barrel – weighing in at 78kg. What a moment! And one that we will never forget. The excitement, the buzz, the adrenaline: we were all on top of the world with what had just happened. You hear all the stories with multiple hook ups, but for it to happen to us was incredible! Photos done, fish bled and into the chill bag, and we were heading back in by 10am.

A box of beers went down a treat and made cleaning fun. Make sure you empty the blood in the bilge pump while you’re out there and not off back at ramp. Remember, you are visitors to someone else’s town, so it’s important to respect it.

Back on land we weighed a couple of our fish and then faced the fun part of cutting them up. Bluefin tuna are one of the best eating table fish, and we were so lucky to have this to share with friends and family.

After a short and sweet morning out on the water – but long day after cleaning – we were ready for a good, well-deserved feed, shower and bed to be back on road back home the next day.
If you haven’t got Southern Bluefin Tuna on your bucket list, I highly recommend it.