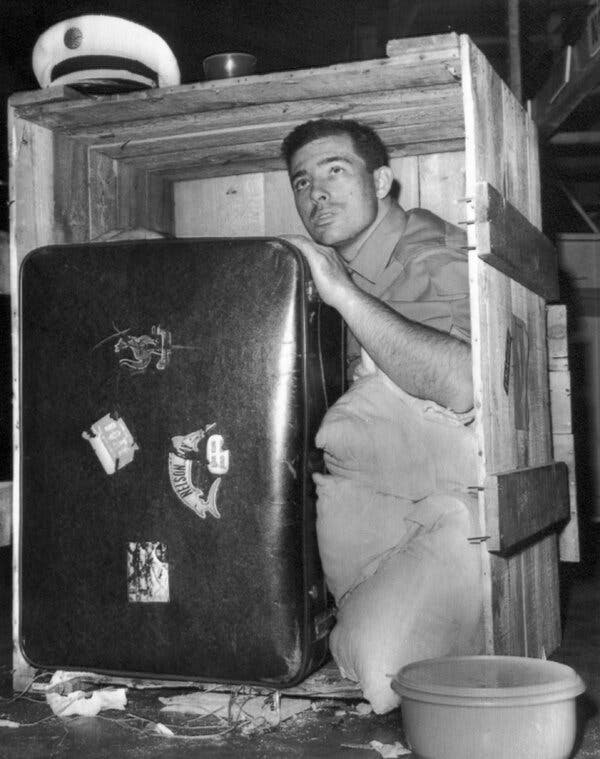 Some guys airmailed me from Aussie to the UK. Now I want to find them – and shake their hands.

Austin Macauley are a prolific UK-based publisher described by some online as a “vanity press scam”.

However, the notorious publisher struck gold this year when it stumbled upon a book so sensational it’s now being turned into a documentary and a potential film.

The Crate Escape, a 186-page memoir by Brian Robson, recounted that in 1965, the homesick Welshman – stuck in Australia on a work/immigration scheme – asked for help to stow away on a cargo plane to get him back to London then his hometown of Cardiff.

After being told, quite rightly, that his plan was stupid and suicidal, Robson found two Irish men who accepted payment to nail him into a crate which joined a cargo flight bound for the UK.

The men nailed Robson inside and sent Robson to his near-death, putting Robson in a low-oxygen environment for days, allowing Robson to be flipped upside down on on his head for long periods, and temporarily crippling his legs.

Robson isn’t angry about the experience, though. Aged 76 today, Robson just wants to reminisce and find the guys who said yes to his crazy scheme

In 1962, when air-travel was a new concept for a lot of people worldwide, Brain Robson emigrated to Australia on an assisted immigration scheme. He would work in the railways of Victoria. The problem was, Robson didn’t settle in well to the job or friendships. He didn’t like Australia’s climate or culture and pined for Ol’ Blighty. Two years later though, he wanted to get back to the UK but didn’t have the documentation or the funds – plus, leaving his job early would have cost him thousands, and he would have had to pay for the plane ticket both ways because the Australian government had sponsored his trip.

Robson has told media he was making only about 30 pounds a month at the time, and each flight would cost him 300 pounds to 400 pounds.

“I had to find an alternative,” told media this year after the story blew up.

Back at the end of 1964, Robson initially attempted to stow away on a ship.

That ended disastrously, with Robson jailed for 12 weeks.

Robson was pretty useless in terms of work ethic, but he was ideal for one thing: fitting inside a tiny crate, the size of a dog kennel.

The inspiration to post himself came from a Pickfords moving company advertisement, Robson has told media since.

“They had a big sign up there saying ‘We move anything anywhere, so I felt, well, perhaps they could move me.”

Robson took the advert literally and purchased a 36 x 30 x 48 inch crate – probably smaller than your flatscreen TV. It was barely large enough to sit with his knees pressed against his chest – not only did Robson cram himself inside (with a pee bottle, torch, hammer, pillow, water and something to read), Robson managed to fit his suitcase inside.

The Irish guys – named John and Paul, Robson has told media (though he’s keeping other details secret) – both worked for Victorian Railways. It was agreed with the co-conspirators they would pretend Robson was a mainframe computer, since those were expensive and delicate and would be kept the correct way up.

It didn’t work out.

Robson endured a truck ride to the airport, was bounced around, and after being loaded onto the plane, Robson was tipped upside down on his head.

36 hours into the trip, Robson was stuck in the cargo hold, flipped upside down, righted, flipped again, and his legs cramped up. Conditions were either freezing or scorching, Robson recalled.

Robson experienced lucid dreams/hallucinations and was unable to break out with the hammer to walk around.

After three days, Robson was sitting in Los Angeles when he heard the voice of an airport worker investigating the torchlight spotted shining out of the crate.

As Robson told media, a worker placed his eye against a hole in the crate, shouted and leapt back.

It was half an hour before federal and airport officials surrounded the crate, assuming a dead body had been airmailed.

Robson was half-dead, in a way – his legs wouldn’t bend, and Robson couldn’t speak.

It took days for Robson to recover in a hospital in L.A. 12,000 kilometres from Melbourne but still 8500 kays from Cardiff.

Reporters piled onto the incredible story which then took an ironic twist.

The surprise twist that got Robson home for free

While Australian lawmakers tried to take legal action against Robson, the notoriously xenophobic US acted surprisingly non-dicky about the whole thing. American authorities dropped charges of illegal entry, Robson’s British citizenship was confirmed and – weirdly a Pan American Airlines flight which was about to depart for the UK had a spare seat. They invited Robson on board, Robson got home… and then, ironically, Robson spent much of the rest of his life travelling before retiring back in Wales.

Robson’s story spread like wildfire following the publication of his modest wee book with the less-than-modest publisher.

Robson has told media he believes one of the Irishmen is now in Eire, the other in Oz. They’re likely to be flown to meet Robson considering a documentary film is underway with rumours of a feature film to follow.

How dumb / genius is this dude?

In The Dogbox wishes to advise readers that if you attempt to ship yourself in a crate anywhere, you could well die. Don’t do it.