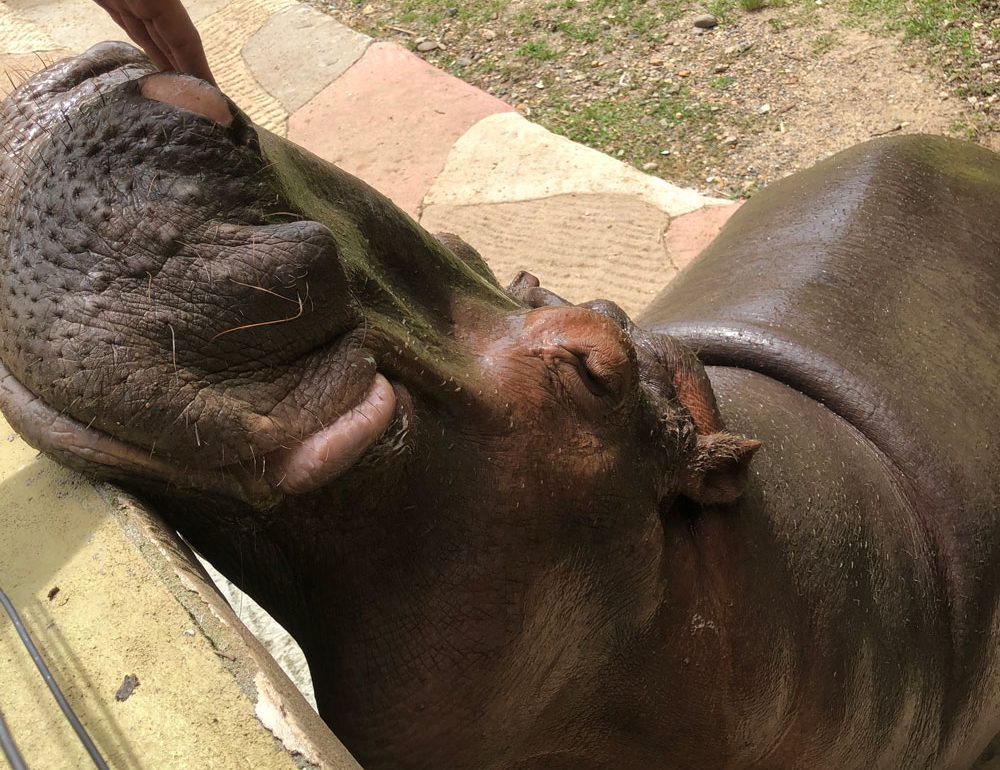 Controversy has followed the first attempts to castrate deceased druglord Pablo Escobar’s feral hippos, which are taking over central Colombia. Yes, you read that right.

As Deutsche Welle, Vice and National Geographic have reported over the past two years, the formerly private menagerie which drug-dealing terrorist Pablo Escobar maintained during his life has now become a zoo, open to the public, and bearing the Escobar-era name Temático Hacienda Nápoles Park (Naples Estate Theme Park).

The zoo has managed to contain most of its exotic animals since Escobar was killed by Colombian and US government forces in December 1993, but the hippos – which weigh 1.3 to 1.8 tonnes each – are breeding too successfully to contain. If you’ve never heard of hippos’ reputation, it’s like this: hippos are one of the few non-predatory animals that will go out of their way to charge and attack, unprovoked.

Because the beasts upset the local ecology, attack humans and cows and are breeding exponentially, some want to cull the beasts. Many have called this cruel, however.

One solution underway: a campaign to castrate the hippos.

Veterinarian Carlos Valderrama, who is director of wildlife conservation group WebConserva, has boasted of being the first person in the world to castrate a wild hippo outside of a lab. It’s slow, difficult work and Valderrama had by 2020 completed just one operation – which took 12 hours and required a crane to manoeuvre the blubbery beast. Hippos are so heavy that Valderrama told DW,  “When we transported the hippo we were castrating, it moved just a little while anaesthetized and the back wheels of the truck lifted up.” It all took place in Colombia — thousands of kilometers from the hippo’s native lands in Africa.  In 2017 a wild male hippo was caught, castrated and released again, but it cost about US$50,000.

Colombia’s hippo invasion is purely because of cocaine kingpin Pablo Escobar. According to Encyclopedia Britannica, Escobar was the world’s most successful drug tycoon. Worth $25 billion at the height of his power, Escobar represented the Medellín cartel, was believed responsible for up to 4000 deaths, including bombing a Boeing 727 plane in 1989, which killed 110 people. Escobar’s lifestyle included a 7,000-acre (2,800-hectare) estate which cost $63 million and featured a soccer field, statues of dinosaurs, man-made lakes, an airstrip, tennis court… and even a bullfighting arena. The property also had a zoo with giraffes, zebras and other huge African mammals. This is where the hippo problem began.

After Escobar was whacked and the Medellín cartel crumbled in 1994, the zoo ran down and the zoology ran wild. Floods, leaks and puddles combined with tropical vegetation, an abandoned lake and the huge Magdalena River became hippo heaven. Today,  Hippopotamus amphibius ranges across 2,250km2 of Colombia.

When Valderrama first spoke to media about the hippo problem around 2007, hippo numbers were estimated to be a few dozen, climbing to 65-80 around 2020, though a study from the Humboldt Institute suggests there could be 150 very soon.

Apparently, hippos have no natural predators, even in Africa, and South America’s apex predator, the jaguar, is only 100 kilograms in weight – pitifully small against a 3 tonne hippo.

Where to from here?

Hippo numbers are kept in check by seasonal droughts, Valderrama says, but they are breeding faster than they would in their homeland. Their faeces is also causing the Magdalena river to be over-fertilised with excessive bacteria, in the opinion of University of California San Diego’s

Jonathan Shurin. “There is an overload of organic matter and a huge abundance of bacteria consuming that,” Shurin has told media. “Those bacteria can drive the oxygen levels really low and cause fish mortality and [damaging] algae blooms.”

Colombian government organisation CORNARE has managed to sterilise ten young, smaller hippos over the last decade, though this is slow and expensive. Tranquilising a huge, aggressive animal is fraught with risk as their tough skin is challenging to pierce and the longer a hippo is under anesthetic, the greater the threat to the hippo’s life. And that’s if you can get near enough in the first place.

Meanwhile the snowflakes at National Geographic are suggesting escaped hippos could help the environment, attract tourist dollars and maintain the 50,000 tourists who visit Hacienda Napoles every year, according to some estimates.

These days, zoos are said to be uninterested in or incapable of taking Escobar’s hippos due to cost, capacity and paperwork, and they cannot be relocated to Africa due to risk of bringing disease into the population.

This leaves the option of a straightforward cull, but when an army-backed operation euthanised an aggressive male hippo called Pepe in 2009, there was a huge public backlash. “Everyone thinks hippos are chubby, nice, cute,” Valderrama has told media. “They think of [Gloria] in the Madagascar movies.”

The stalemate has actually been going on for ten years. Do you have a hippo containment solution you want to share with us? Leave a comment at www.facebook.com/inthedogboxx.