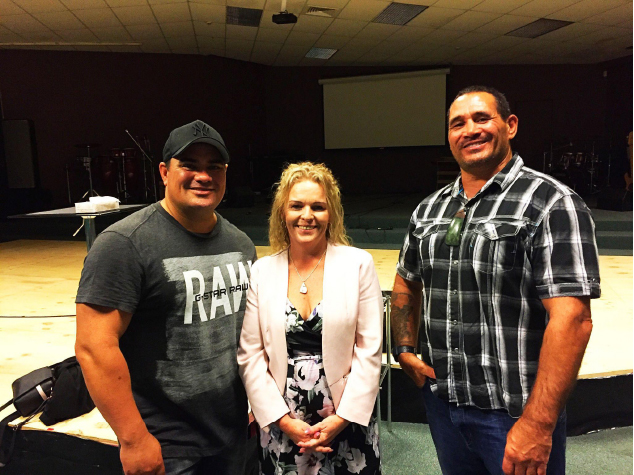 Over the past seven years, Filipa Payne has battled hate mail, massive air fare bills, abuse and threats to bring together some of the Commonwealth’s most experienced human rights lawyers and challenge the Australian government in a class action suit, fighting for the 501s — over a thousand men and women put in inhumane prisons then tossed out of their home country.

The former Canterbury bogan and netball umpire shares the Erin Brockovich- style story of how she came to be thought of as Mum by hardened men.

It’s been a full-on year for Filipa Payne, launching a book about the 501s as well as launching a class action suit against several departments of the Australian government for breaching the human rights of people deported after 2014. Based in Christchurch, Filipa is Ash Vegas born-and-bred, a self-described “bogan” who says she was “no angel” growing up – but who would eventually become an angel to vast numbers of men deported f rom Australia under section 501 of Australia’s Migration Act. There’s been media coverage of the 2300 Kiwis deported between 2015- 2021, but surprisingly little has been written about 49-year-old Filipa Payne. It appears most news reports get sidetracked by the sensational stories of the deportees. Few stories look at the work of Filipa, one of the only people out there caring for Australia’s most demonised people.

FROM ASHBURTON TO AUSTRALIA

Brought up bogan after arriving in NZ from Singapore age 12, Filipa was a netball umpire, preschool teacher and mother of five with little exposure to international politics before she wrapped her arms around her first prisoner.

Filipa moved to Ballarat in 2006. In 2013, at age 41, she found herself with her (now former) husband and five kids. At the time, then-Immigration Minister Peter Dutton had begun to act on section 501 of the Migration Act and s116 of the Australian Migration Act, which allow the Australian Government to imprison permanent residents and move them swiftly towards deportation — often after enduring uncapped imprisonment in immigration detention facilities. It was all legal, though indisputably cruel. Many people were being sent to New Zealand only because they were born here, and many of those rounded up for deportation had already served their prison time in the past.

During 2014, Filipa moved to the Gold Coast, then moved back to NZ with three of her kids after her marriage ended. Before she did so, however, Filipa found herself caught up in protests organised by Erina Morunga- Anderson, a migration agent based in South Australia.

Filipa was encouraged by Erina’s trailblazing, and it wasn’t long before the women embarked on a hīkoi ( journey/march) which would eventually become Iwi N Aus.

“While we were on the trip, people’s families hosted us. We were able to get quite personal. I was Pākehā but the hīkoi was a Māori cultural experience. I learned it was time to be quiet and to learn. I learned being White has given me privilege in this world and I believe now, in a racially-implemented migration act, it’s important that Pākehā stand up and address this. And I learned the hug had to start at the beginning of visiting people. It builds trust, shows a human connection.”

“After the hīkoi, I came back a different person. My marriage didn’t survive.I left him in August of that year after the hīkoi. And, to be honest, I hit rock bottom.”

Filipa’s family were split, and transitioning between countries, while Filipa says she was struggling to get employment. “I was studying at university and my mental wellbeing just couldn’t cope. So I’m forever grateful for the campaign, because when I hit rock bottom, other people relying on me kept me going.”

While plenty of deportees have been involved in serious offenses, and roughly one in two commit crimes after being dumped into NZ without a support system, the s501 punishment clearly didn’t fit the crime, and Erina and Filipa weren’t fooled by media stories which claimed every deportee was evil — stories which, sadly, seemed to be winning over most of the Australian public. “Australian media were glorifying Duttton’s kickings- outs,” Filipa recalls. “But the people I was talking to were not the murderers and rapists.”

Take the elderly man who bought medicinal marijuana for his terminally- ill wife, the intellectually disabled youth detained for tagging, or Ko Rutene, a decorated former soldier and one-time Afghanistan bodyguard to John Key, deported in 2016 for associating with the Rebels despite having no criminal convictions or charges pending.

“People contacted me, I started talking to them, finding out their personal stories, and finding what they were projecting in the media and what I was hearing two different things.”

Soon enough, Filipa forked out $13,000 to go to the incredibly remote Christmas Island, a far-flung corner of Australia 2600 kilometres f rom Perth and so remote that it is part of Asia. The date was 15 November 2017. Filipa found it “very scary at the time.”

The scariest part: while putting on a brave front, back home Filipa was homeless and living out of her car, following a separation and Australian breakup and house-building failure across 2014-17.
“I believe my husband didn’t want me to be a voice for helping anyone. I couldn’t live in a White privileged world anymore. That changed my spectrum on what I expected.”

Working for the 501s gave Filipa perspective on the people she wanted to be surrounded by — and highlighted those in her family who were unsupportive.

Over the years Filipa estimates she has forked out $70,000 of her own money, including a second trip to Christmas Island in 2018.

“I believe there will be more deaths in detention if we don’t give these guys some aroha,” Filipa told the reporter.

“Even though I’m scared on the inside I’ll go in and do the best I can.” Asked why the Christmas Island detainees deserve her love, Filipa replied, “No one can move forward when judgement and condemnation is continuously placed on top of you. How about help, support, love and compassion.”

By late 2020, LawAid international human rights barrister Craig Tuck joined a legal team to prepare for Filipa and her 501s a legal road map for the class action suit. Two- thousand enquiries were received by June 2021. A David and Goliath battle brewed.

FROM ASHBURTON WITH LOVE

Filipa says growing up as a “non- conformative Ashburton bogan” means she has a “very colourful background.”

“I’m no angel — I will never profess to be — but my character is sound. I mean, I grew up with a very adverse background. Family quite dysfunctional. I came f rom a background where alcoholism, sexual abuse and physical violence were in my childhood a lot. It wasn’t until I started having my own babies and learned how to be a good mum that I learned my perception of life wasn’t healthy. I thought the harder you were the better life was. I was a very angry person.”

“I grew up in Ashburton. ‘Boganville’ is what we were called: RTDs, black jerseys and parties. How we didn’t die, doing [wild] stuff is unbelievable.”

“I have no criminal record of any capacity. But I always knew because I was a blonde, blue-eyed Pākehā I was not treated in the same capacity as other people.”

Because of her personal experience, Filipa has come to understand that people can’t recover and rehabilitate if we don’t allow them to grow.

“I often feel like the mother of the people I work for. I feel like my role is very maternal, protective and caring. After speaking to these people face to face I find it is one of the hardest things in my life to leave them.”

It all takes a toll. Many days, Filipa receives hateful messages. There were death threats in 2014 and a man telling her where she lived and that he would burn her house down. Australian politicians and news reporters condemn the people she cares about, and even Filipa’s own family aren’t always supportive.

Filipa says she is inspired by Wang Weilin, the Chinese protestor who stood in front of tanks in Tiananmen Square. It also wouldn’t be unfair to compare Filipa to Erin Brockovich — Filipa has accrued and impressive amount of legal knowledge, and battled through it all while a solo mum.“I find [the comparison] very flattering. I hope I could be a speck of what she is.”

International Human Rights barrister and transnational criminal justice specialist Craig Tuck of LawAid is the person taking care of the legal stuff. Craig has been working with Filipa preparing a legal opinion about the class action suit road map. “It’s a mammoth task for her in terms of the communications, crystallising what can be done realistically and manage.” “Filipa is motivated, her heart’s in the right place. And she’s very genuine.”

Migration agent Erina Morunga met Filipa in the Gold Coast in June 2013, as concerns were mounting over the Migration Amendment Act, which would be passed into law December 2014. The two bonded deeply as their mettle was tested during visits to lock-ups in a hīkoi which took 39 days. At times, the campaign over the rights of thousands of people boiled down to just two women shouting outside the Beehive, as the two toured from Auckland to Wellington to try get NZ’s government to act.
“I’m trying to be ambulance at the top of the cliff helping New Zealanders get off the Subclass 444 visa, which denies citizenship; meanwhile Filipa has continued to be the voice of the deportation issue.”

“I’m very proud of her: it’s not easy putting your face out there when people are so unsympathetic. Filipa has tirelessly borne the brunt of attacks and criticism because people think she’s trying to defend a bunch of people who are soft targets for political brownie points.”

“I adore her, she’s an amazing lady. Despite her battles in life, she’s had no financial support, she’s done this all on her own back for years — often sacrificing doing things with her own family. She really does care.” Erina has seen first-hand the power of Filipa’s compassion.

“A lot of guys in detention centres can be big Māori and Pacific Island men. Filipa is teeny tiny but they are humbled to be in her presence. All I can visualise is the guys embracing her. She always makes them give her a hug and a kiss. They can be quite shocked: this little Pakeha lady isn’t intimidated one bit by them. She doesn’t judge anyone by their appearance.”

“You would think over time the kaupapa would wear off after she left Australia, but it hasn’t. It’s a lonely journey she’s taken, but Filipa won’t give in. I believe she’ll fight this to her last breath. It’s in her blood to fight.” “I’m surprised Jacinda hasn’t taken the time to meet with her. They just think she’s an annoying little pitbull. She really deserves more recognition, more acknowledgement. She’s not politician standard, might not be the greatest orator – but she speaks from the heart. And she deserves a lot more kudos.”