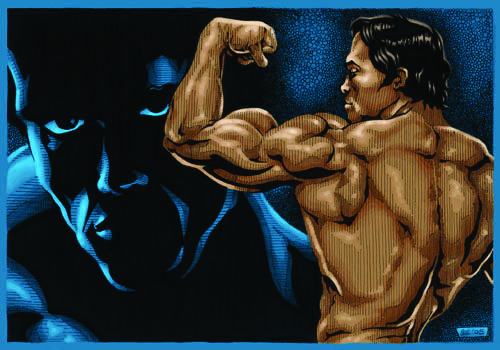 Shane Evans is a true blue Kiwi average Joe. The 49-year-old lives in humble Whangarei, works as a signwriter, trains at a boxing gym once or twice a week, drives a vintage Ford, enjoys spiced rum, and cleans up after his teenage son.
Evans is also slowly-but-steadily gaining a reputation as a jaw-droppingly good
illustrator – after more than twenty years. Evans was fortunate to grow up in the heyday of splatterpunk and horror movies in the 1980s, and a big part of
the reason his astonishing artwork is turning more and more heads is that
Evans is unafraid to illustrate the things that really matter to blokes: Arnie, Bruce Campbell, Robocop, Tarantino, the Toxic Avenger, Judge Dredd, plus
some occasional boobs.

In The Dogbox was lucky to squeeze in a quick interview with Evans
during smoko.

Most comic book artists are wimpy little skinny geeks. You’re a big
muscly dude with a hard punch. What’s a big tough guy doing
drawing comic book art?
I go through phases of really enjoying exercise… and then back to lazy. But
I think anyone who grew up on He-Man cartoons, Macho Man Randy
Savage, Arnie movies and comic books featuring big guys fighting
each other has probably lifted some weights occasionally. I need to get
back into it, actually. Plus after dealing with difficult customers, punching stuff is very relaxing.

Who are your influences and who would you like to give a shout out to?
I grew up on Asterix, Conan and Judge Dredd comics. Pretty big fan of artists Simon Bisley, Frank Frazetta, Bruce Timm, Martin Emond, H R Giger, Coop, Jamie Hewlett, Dave McKean, Mike Mignola. And I keep finding new artists every day. A lot of the artists that I enjoy aren’t anything like my artwork. I mean, why would
I be impressed or inspired with art I could do myself?
I watch a lot of cult, grindhouse and B-grade movies too. So, contentwise, Troma films, Astron 6 films, Evil Dead, Mad Max, Rocky Horror Picture Show, Death Race, Tarantino etc…. They work for me. I prefer a creative, original cheap film over a bloated
generic hollywood popcorn flick.

Okay, okay, not all Dogbox readers read graphic novels, and not all graphic novel readers watch movies or read Dogbox. What are some excellent graphic novels
and movies you want to give a shout out to?

Even though I love comics, I don’t actually have a lot of superhero comics. I’ll start with what I think are some classics. Slaine the Horned God: Barbarians, violence, myths and great hand painted artwork.
The Dark Knight Returns (Batman): One of the best batman stories, featuring an older, worn down Bruce Wayne. Very influential on the comic scene at the time.
Brat Pack: A very dark humour, vicious dissection of all the superhero cliches (in the 80’s).
The Tragical Comedy or Comical Tragedy of Mr Punch.: A hard one to explain, a family with a dark secret and fantastic mixed media artwork.

A few recent books worth checking
out:

• Blacksad: A crime noir comic featuring anthropomorphic characters. And amazing handpainted artwork.
• Monsters: A comic by the great Barry Windsor-Smith that started as a hulk story, but ended up as a 360-page Frankenstein-style tale. Great black and white artwork.
• Pim and Francie: An artbook, with very loose storylines thrown in. Like a Disney cartoon turned into a grindhouse / horror movie.
• There’s also ‘Did you hear what Eddie Gein Done?’ It’s a beautifully illustrated
book based on the true story of serial killer Ed Gein. The inspiration for films such as Psycho, Silence of the Lambs and The Texas Chainsaw Massacre.

You’ve painted murals for churches, private commissions and district councils. What are some of the commissioned pieces of art you’ve appreciated most – and what have
been some of the shit gigs?

Many years ago I painted a church mural in Auckland, just off Queen Street. Took me about a month of prep and painting. I wasn’t painting my usual type of content (not being a religious person). But the reactions of the church goers and local regulars was fantastic. It’s great to get positive comments after a month of work. Another older piece I remember was a landscape I was commissioned to paint. I was asked to hand the painting over as a gift to another family member. They actually started
crying and then gave me a huge hug. Not a common reaction. Kind of awkward, but also very cool.
I also used to do quick airbrushing demos at car shows. This always made me smile, as I could crank out pretty average, rough, quick demo’s just to show how the equipment worked, and people would be so impressed. I would be standing there about to throw it in the nearby bin, and they would be watching me intently and
gushing over the artwork. One piece of comic book artwork that I still like, was an old cover I did for a pulp style comic called Brother Bones. It was just an image that I
thought worked really well with the content. I got some great feedback
when that was published.

Tell us a story about somebody reacting unexpectedly to a caricature you have drawn.

I usually tune out the difficult people. I have, however, had several people suspect me of Satan-worship and having mental problems. However, when you have just drawn a horror illustration or airbrushed evil skulls all over a vehicle…. This is a huge compliment. A job well done. Art is very individual. If people don’t like it, move along. I don’t know if I can say this is a cool addiction. It can be frustrating, time consuming and sometimes you just want to burn all your work. You think screw this, I quit! And then a week later you’re buying some new pens, an artbook, and sketching away again. When you create something you’re proud of, it’s a great feeling. When you have a happy accident, awesome! When you crank out a sketch and it all comes together, hell yes! I think you need to be a special breed of stubborn, stupid, creative and patient to get good at illustration. And unfortunately for me, I love it.

Check out Shane Evans’ astonishing artwork on Facebook (search ‘Art of Evans’) and at https://se.fury.net.nz/